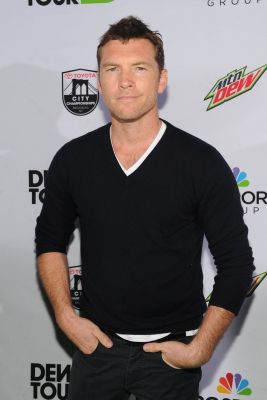 If you had a sit-down with God, what questions would you ask? That’s the challenge posed to Sam Worthington in his latest film, “The Shack,” and one he says intrigued him, as he’s been on a spiritual journey himself. Though it’s not the kind of thing he’s talked about much.

Hitting theaters March 3, the film is directed by Stuart Hazeldine and based on William Paul Young’s best-selling novel. The story follows Mack (Worthington), an upstanding family man with a troubled past, and an even more tragic present, when his youngest daughter is abducted. He falls into a deep depression, until a mysterious letter compels him to journey to a shack deep in the Oregon woods. The film co-stars country-music legend Tim McGraw as Mack’s friend Willie, and Octavia Spencer (“The Help”) as a mysterious woman named Papa, who meets Mack on his journey and helps him re-evaluate his life.

It can have a stigma about it. In certain circles, people don’t want to talk about faith and God. Or they don’t know where to begin. A movie like this hopefully opens up some kind of discussion, so people realize it’s OK to discuss it. I didn’t come from a religious background. I was around 19, and a friend gave me a Bible, and said, “Maybe you should read this — it might calm you down.”

I read all of it. A couple of times. I like the story of King David. Because he’s fallible. I identified a lot with that. [He chuckles.] You can make mistakes and do some bad stuff but you’ll still be forgiven. That parallels with the movie. The Bible shows you these lessons of how to become a better person in life. And you take from it what you need at that point in your life each time. And . . . it helps.

My mom says that. But, frankly, it feels rather distant to my regular day-to-day.

For the last 20 years I’ve been kind of discovering faith, and God. I’ve never really talked about that till doing this movie. Now I have a reason. It’s a personal journey, but I realize it’s one that’s OK to share. I’m not thrusting religion onto anyone. It’s just a journey I’m on, discovering what my connection to and relationship with God is. Becoming a father, too — you think about bigger issues. I was telling my mate the other day that when my kid gets angry and frustrated and a bit lost, I can hug him and he feels all right. When I pray to God . . . he might not be able to give me the answers, he may not even talk to me . . . but I feel the same as that hug. I feel OK. It’s an odd feeling . . . and it was odd to try to explain it to my friend. I’m still discovering it. But it’s a good discovery.

She’s an Academy Award-winning actress. So you know she’s coming in with unimaginable talent. On top of that, she’s warm and opening. So you just melt into her. It’s great. She’s a very welcoming person.

And I heard you hung out a lot with Tim McGraw.

Oh! Tim’s painful. [He laughs.] No, he’s the most humble man I ever met. For someone who’s achieved so much and is that famous, he’s the most down-to-earth man. He told me one day, “Sorry I’m so tired, Sam — I had a little gig last night.” I said, “That’s OK.” Then I found out that little gig was at some football stadium with thousands of people. I said, “You really undersold that, mate.” But that sums him up — he doesn’t shout it from the rooftops.

Looks like you’ve got several other movies coming out soon.

I did a movie called “The Titan,” a sci-fi movie coming out later in the year. And at the moment I’m working with Paul Bettany on a thing about the Unabomber — Ted Kaczynski. Which sounds heavy . . . and it is, but we’re trying to find the humanity in it.

Who do you play?

I’m the guy who actually caught Kaczynski. He eluded the FBI for 17 years and this FBI agent created a new way of investigating. And managed to catch him.

Well, that sounds like an interesting challenge. And then, of course, there are those “Avatar” movies coming down the pike. “Avatar 2,” “3” and “4.”

Those little movies . . . yeah. [He laughs.] They start midyear, I think. Something I’m very excited for.