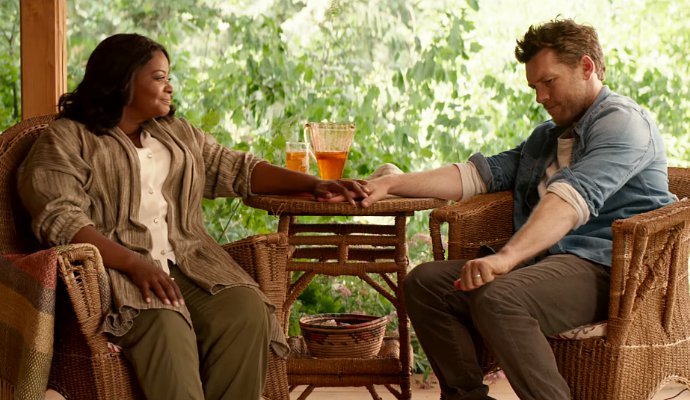 “Avatar” fans know Sam Worthington as the adventurous Jake Sully, and the actor recently appeared as a tough military man in “Hacksaw Ridge,” which was nominated for a best-picture Academy Award. (It won for film editing and sound mixing).

His next role will be a very different one. He stars as Mack Phillips, the heartbroken father at the center of the action in the faith-based film “The Shack.”

“Sometimes you choose movies because of the character,” Worthington said during a recent interview. “I related to the hope of it.”

The movie, in limited release today with a wider release set for Friday, is based on the bestselling novel by the same name. Mack is a happy family man whose family experiences a tragedy on a camping trip. Afterward Mack is paralyzed by feelings of sorrow and rage and a crisis of faith until he receives a mysterious invitation to come to a remote shack. Worthington was drawn to the narrative of Mack’s powerful journey.

“I kind of went backwards,” Worthington said. “Suffering an immense tragedy and coming out through the other side, that’s what I found an affinity with. The message is a hopeful one. I think it might make us look at things differently.”

Worthington, who appeared with Arnold Schwarzenegger and “Empire” star Terrence Howard in the Atlanta-filmed action thriller “Sabotage” in 2014, had not previously read the book by William P. Young, which was initially self-published in 2007 and has now sold more than 10 million copies.

“I read it over and over and started to see the themes of the book. I wanted the theme of forgiveness to resonate,” he said, noting how he personally related to the work. “I’ve had guilt. I’ve needed to forgive people. The healing process takes time. Sooner or later you’ll come out the other side. I think that’s a great message for our time.”

“She’s an extremely warm and open person,” Worthington said of Spencer, who plays the Almighty in “The Shack.”

Country star and actor Tim McGraw, who plays Mack’s faithful friend Willie, was a joy to work with as well, he said.

“I know he’s had a massive career but he doesn’t come to work in limo wearing a chincilla coat,” Worthington joked. “He’s really into his job as an actor.”

Debuting during the season of Lent, “The Shack” is bound to find a strong fan base among the faithful, but it’s a story meant for anyone, Worthington said.

“I don’t think it’s built for just a Christian audience,” he said. “That’s what I like. I didn’t come from a religious background. It’s a story about a man who has to learn to forgive. We all struggle with our own shacks. I like the message that we’re not alone. We have God, we have our loved ones. If you just open your eyes, there’s going to be someone to help you.”